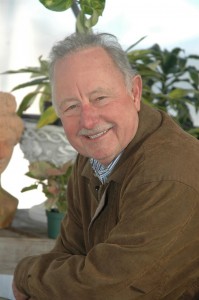 I started out life as a salamander and before long found myself walking upright through the marshy swamps looking for turtle eggs and general mischief. Over the years, I’ve had my tail broken a few times but it grew right back as you can see. I was the middle of three sons born to Thomas L. Matthews and Hallie C. Matthews. Tom , the older, and Hal, the younger of my brothers, both claim to be plant experts but acquired real professions (music and insurance) to fall back on. We grew up in Hampton in the days when Tabb was a filling station and Denbigh was a foreign country. I’m the only one left in this neck of the woods. Local officers keep threatening to throw me out.

When I graduated from Virginia Tech (it was V.P.I. in those days) in 1967, two things occurred to me: (1) I qualified for infantry duty in Vietnam and (2) I graduated in Horticulture and (2a) there was no career called “Horticulture.” Panicked, I enrolled in graduate school in a Pre-Medicine program and with a year found myself in Army green while my friends were getting married and having kids or moving to Canada. I acquired an officer’s commission, proceeded immediately to Korea, and hid myself in a supply depot until the ruckus was over.

Coming full circle to start a designing/planting/general yard work business, I found myself celebrating Christmas in 1973 with a new wife, a new pick-up truck, and a retriever puppy. Two of these are gone now and I list them in that order, otherwise Sandy will be gone too. I decided to do the work myself (because no one else wanted to) and slummed around for a few years taking on any customers who would pay a buck for a bush. When the city officials found out I was illegally running a business in my back yard, I quietly slipped out of Hampton under veil of night and ran out of gas in lower York County. With no means to get to South Dakota, I decided to squat in Tabb and offer my services to the locals while developers converted farmland to cul-de-sacs.

My first store was a rented location off the main road beside a drainage ditch where a few people wandered in looking for good advice and instead found me. One thing led to another and in 1984 I had my very own store (this time on Route 17 before it became a parking lot twice a day) with my own staff of dedicated administrative staff, salespeople, landscapers and nomads. I had been annoying customers for years but now I had built in victims. It’s no wonder that a faithful few are still around. Still, I’ve made friends that I’ve kept for life. I failed in all areas of business at least three times. However, each time I saw buzzards making circles over my head, I was pulled up, usually by a caring employee and set aright. Thank you all past, present, and future.

The die was cast. I was destined to a fate of my own creation. They didn’t teach business principles in horticulture school, so I had to learn how to run my business OJT and by paying attention to the notes attached to rocks thrown through my window by customers and creditors. I decided to name the business Ken Matthews Garden Center for a number of meaningless reasons, but mainly because my name on a lighted highway sign might help me find my way home on Saturday nights before my wife came looking for me.

I was plucked from a generation of genes that compelled me to love the soil, open air, and hard work. My brain was seasoned with bits of information useful only to those that not only embraced me for doing what I do but also paid me for doing it. That was 1984, this (as you know) is 2021. This is getting out of hand.

Our Hours:
Tuesday to Saturday
10am – 4pm